Inspired by the Girl Scout Cookie, Samoa Cupcakes with Easy Dulce de Leche Buttercream are topped with toasted coconut, and chocolate stripes! This recipe can easily be made gluten free.

One of my favorite Girl Scout Cookies is the Samoa (called Caramel DeLites in some areas). Many years back I posted a recipe for Samoa Bars, and several years after that I made the Samoa Bundt Cake.

After I made the Samoa Bundt Cake, I started thinking about other versions of the cake that would incorporate the delicious dulce de leche buttercream and toasted coconut combination. Since then, I’ve been wanting to make Samoa Cupcakes and finally decided it was time.

The last time I made the Samoa Bundt Cake, I used my favorite chocolate cake recipe and swapped the all purpose flour for Bob’s Red Mill Gluten Free 1 to 1 Baking Flour. This cake is the BEST homemade chocolate cake, likely the best chocolate cake period, that I’ve ever had.

You can use any cupcakes you like for this recipe. I prefer chocolate and on this particular day I used a gluten free chocolate cake mix. I do not recommend the brand. From now on, I’m sticking to my favorite homemade chocolate cake recipe.

I chose purple cupcake liners to match the purple box of Samoa Girl Scout Cookies. I almost exclusively use aluminum foil wrappers because they don’t allow grease to leak through the wrapper.

The first thing you’ll need to do is make the dulce de leche. I have a step by step post here to make Easy Homemade Dulce de Leche. I have seen prepared Dulce de Leche in stores, so if you prefer to purchase it, you can certainly do that.

You can do this in the oven, but I prefer to toast coconut on the stove top so I can have control over how brown it gets and make sure it’s being mixed so it browns evenly.

To do this, I spread the coconut in a large skillet and turn it to medium-high heat.

I like to use one of my favorite silicone spatulas to push the coconut around since it’s soft and won’t scratch the nonstick surface of the pan. It’s also heat resistant up to high temperatures, so it won’t melt when being used with high heat.

You’ll want to be stirring constantly because the coconut browns at an uneven rate – some pieces get brown quickly while others do not. The constant stirring will help it brown more evenly.

Once it starts to brown, it happens quickly. Keep stirring.

There’s a fine line between perfectly toasted and burnt, so make sure you make the call before any of the pieces start to turn black. When the coconut is nice and brown, transfer it to a plate and spread it out to cool.

Make sure your cupcakes have cooled completely before adding the buttercream.

With one hand, hold a frosted cupcake over the plate of cooled, toasted coconut. Pick up a handful of coconut with your other hand and press the toasted coconut into the frosting, shaking the cupcake gently to remove excess coconut that is not sticking.

Repeat with all the cupcakes.

Melt your chocolate and transfer it to a disposable pastry bag or resealable plastic bag with a corner snipped off. Squeeze the melted chocolate over each cupcake using a back-and-forth motion to create the striped pattern characteristic of Samoa Cookies.

You may be wondering if I’m done making Samoa inspired desserts . . .

I used a gluten free cake mix I had on had for these cupcakes, but it ended up dry and crumbly. I highly recommend the Beatty’s Chocolate Cake recipe made with Bob’s Red Mill Gluten Free 1 to 1 Baking Flour.

Check out these Samoa Bars and Samoa Bundt Cake!

Check out these recipes with coconut:

Coconut: Not just for dessert 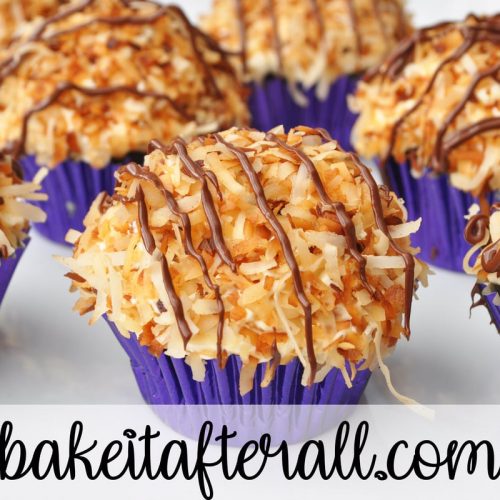