Apple Crumble Pizza Pie is a one of a kind! Pie crust topped with apples and sprinkled with cinnamon sugar and a crumble top!

Let’s kick off September with an apple recipe, shall we?  This recipe is a family favorite from my mom’s old Betty Crocker Cookbook. Interestingly, it has been omitted from my newer Betty Crocker Cookbook, as the one I received as a wedding gift does not have this recipe!  I was really surprised to discover this considering how much my family loves this dessert.  It’s so simple, especially if you use a store bought pie crust, but it looks impressive and tastes just like apple pie, but possibly better!

Pie dough is rolled out onto a pizza pan and serves as the bottom crust of this “pizza” pie. Make sure you aren’t using a pizza pan with holes in it. I have to borrow my mom’s vintage pizza pan, but I really need to invest in my own. Alternatively, you could use a flat cookie sheet.

I’m including my go to pie dough recipe. I’ve tried many and this is the one that was so good, it wasn’t even worth trying another recipe. It’s “all butter” dough – so no shortening. Because of that, it’s super buttery, flaky, and tender. Everything you want in a pie crust.

Apple Crumble Pizza Pie is large, so it calls for the amount of pie dough for a 2 crust pie. If you’re using store bought pie dough, you’ll need 2 crusts. The homemade pie dough recipe below is for a double crust pie, so you just need the 1 batch.

After the dough is pressed out to form the bottom crust, apple slices are artfully arranged on top of the pie crust in a really pretty design.

Rather than being mixed with cinnamon and sugar in a bowl like for a traditional apple pie, the sugar, cinnamon and nutmeg are first mixed then sprinkled over the apple slices.

A crumb topping is added and the pizza pie is baked to perfection.

The All Butter Pie Dough recipe below is what I use for my Gluten Free Pie Crust and it’s A-MAZING. I use Bob’s Red Mill 1 to 1 Baking Flour in place of all purpose flour and keep everything else the same. Don’t worry if your dough is the slightest bit gritty – the crust after baking is perfect.

Check out these other dessert recipes that feature fruit: 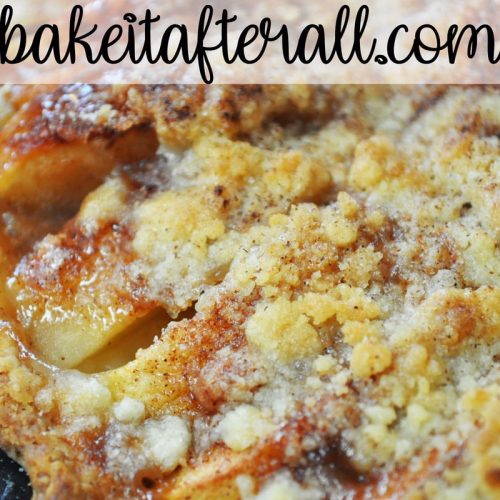